volcano lover constituted 3 mixed-media installations at the Tasmanian Museum and Art Gallery. The work emerged from a research field trip to Mount Yasur, an active volcano on Tanna Island, Vanuatu, famous for its regular small-scale eruptions.

volcano lover was presented in early 2011 at a time when the world experienced the devastation of the Tohoku earthquake and tsunami in Japan, and later the drifting volcanic ash cloud from Iceland’s Grímsvötn volcano, which disrupted flights globally for weeks. Against this backdrop the relationship between the Tanna Islanders and their volcano could be viewed as a microcosm of the global situation. Anxieties regarding the potential power of natural disasters are widely felt, and the themes of the exhibition and the soundscape of Mount Yasur’s regular eruptions took on a more universal tone.

volcano lover evolved through interdisciplinary research with the departments of Earth Sciences and Chemistry at the University of Tasmania. Components of the project engaged primary school students and the general public in the fabrication of installation components.  The video and sound components of the work were recorded with residents of Mt Yasur volcano.

volcano lover melded documentation of lived encounters with volcanoes, subterranean science and archetypal presentations of human passion. The work offered opportunities for shared viewer experiences and different encounters with the spectacular, scientific or social aspects of the volcanic. Viewers were invited to lie side by side with friends and strangers on a round, hibiscus-patterned sofa, watching Mount Yasur’s explosive volcanic activity projected on a circular screen suspended above. The circular volcano lab at the centre of the gallery became a hub of pseudo scientific enquiry where multiple activities contributed to an evolving artwork. The small circular theatrette enclosed by heavy red velvet curtains contained a loveseat positioned to view videoed interviews with villagers living in the shadow of Mount Yasur. 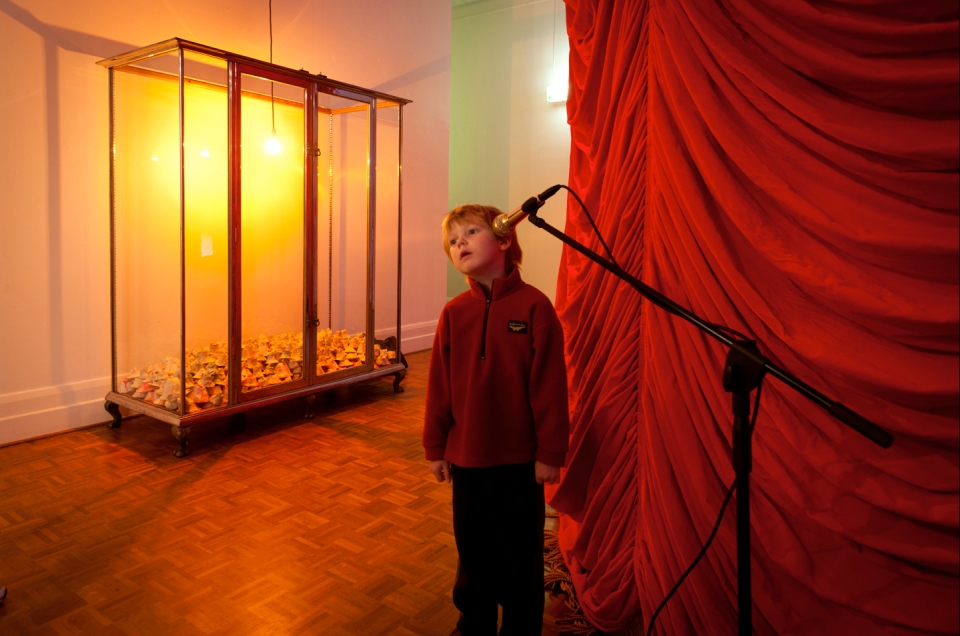